After talking with a couple of friends where I boldly mentioned that I think those ‘who called’ phone number sites seem like a doable ‘1-week project’, I quickly got called out on that one, so I decided to go for it. This is my small story about creating a ‘who called’ website. - It took almost 2 weeks before I was satisfied, twice as long as my first estimate. This is a short summarized story about me creating whocalled.today

First thing first; I needed a domain name and as always most of them are taken but I was lucky to register whocalled.today. Which turned out to have a `history`, more about that later.

Aiming to create a site quickly excludes new tools and frameworks with high initial learning curves, which is why I chose to set up a LEMP LXC Container in one of my dedicated servers.
LEMP - Linux (Debian), nGinx, MariaDB, PHP 7.3.
LXC - Virtual server controlled with Proxmox.
This is also my favorite setup because there are very few issues in this Stack I can’t handle.

I created my own backend framework back in 2007, it's not modern but it is robust. It's a very simple MVC thingy that initially used MySQL which later on was updated with both MariaDB and PDO, and a couple more modern Trix, to make sure it stays secure.
Bootstrap - Frontend framework, perfect for responsive sites.
jQuery - Ready to go Javascript tools.
Libphonenumber - Handles phone numbers, makes the site work. A must have.
For the frontend I’m using Bootstrap 4, mainly because I appreciate the rapid development made possible using it, I know there are a couple more modern alternatives. But Bootstrap solves my needs related to creating a responsive site.
I usually prefer vanilla Javascript but to speed up things I'm including jQuery into this project. Also, I'm using libphonenumber for phone number handling and processing/formatting it's a must have, more about that later.

There are as many opinions about good designs as there are developers/designers in the world, and to make the choices easy I just simply had a look at ~10 different sites I like and then cherry-picked the solutions and ideas I like the most. The important thing is to get a good working site up and running quickly in step one. Achieving perfection takes years when it comes to the UX, I'm choosing a middle way, for now, aiming to beat the majority but admitting there are still possible improvements. 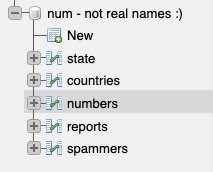 Structure the database - How hard can it be?

Setting up a database with a couple of tables containing numeric phone numbers and adding a couple of indexes for quick searches in the tables was done in minutes. Keeping it simple and not adding loads of unnecessary things, makes the development progress quickly.

Even before starting to look at this project, I assumed there had to be a simple solution for formatting, locating/location and handling phone numbers, and that's where libphonenumber comes in. All I had to do was to create a new object/instance of libphonenumber and throw in the number in one end and then I could easily get the country, area code and area name, It was just so easy.
$gbNumber = \libphonenumber\PhoneNumberUtil::getInstance()->parse($input->search, "DE");
$country->select_country($gbNumber->getCountryCode());
$geoCoder = \libphonenumber\geocoding\PhoneNumberOfflineGeocoder::getInstance();

$countryCode = $gbNumber->getCountryCode();
This gives me the correct countrycode from a phone number, Im sure its possible to optimize and improve my own code and solutions in time. But it all works and it has been a very straight forward development of the site.

Putting it all together

The biggest challenge was to make the site user friendly, enough. I hate sites that lack all sense of logic, at the same time I'm not a UX or designer myself so trying to put this all together into a usable interface does take time.
I decided to go with a simple front page with just a search bar and some basic links and texts. I think there is a lot more to do here in the future, I like to add latest searched and reported numbers and if possible also other user-generated content (which will be reviewed before publishing).

Search domains whois history with help of our tools. See who owned the domains before you and what has changed. View whois »

Avoid problems by knowing who or what you are talking with. See the geographical location of any IP address, just click the button and input the IP. Trace ip »